I have a number of FreeBSD servers, and I'd like to put VNC server software on them, then access them from a Mac running OS X 10.9.5.

LogMeIn offers one of the best remote desktop software for Windows and Mac OS X for individuals and businesses. Even though the free version of LogMeIn was discontinued recently, that doesn’t keep it from being listed as one of the best teamviewer alternatives. The best free client for Mac OS X, in my opinion, is Chicken of the VNC [sourceforge.net]. At the commercial end of the spectrum is Apple Remote Desktop 2.1 [apple.com]. Apple Remote Desktop is much more than just a remote control solution; it provides desktop and systems management tools, software distribution tools, mass screen sharing.

I really don't want to have to access them from a virtual windows machine running on the MAC :-(

My memory is that Apple had a built in client with a non-obvious name, perhaps 'screen', which they 'fixed' a few releases ago to only work if the VNC server was itself from Apple, running on a Mac. Perhaps they have since unfixed it.

I once used 'chicken of the vnc', which was flaky on whatever OS X release I had 2 years ago. I also used another non-apple client from that Mac, which was flaky in different ways. (The built in app was unusable.)

IIRC, I was using 'Tightvnc' or 'Realvnc' on my servers at that time, which had worked fine with the first random windows-based VNC client I tried.

All I've heard about so far are

When referring to OS X releases, please use release numbers in your answers, not just names of cats - or else link to a page that translates the cat names to release numbers. I don't have Apple's release code names memorized.

[Update, after first answer received: alternativeto.net is a great source for finding software of this type. I now have tigervnc running on one server and on the Mac client. No flakiness so far, but the Mac client for tigervnc seems unwilling to let me connect to multiple servers at the same time, and Mac's GUI interface seems unwilling to let me launch multiple copies of the client program. So still looking for alternatives, but making progress.

Still trying to figure out how to invoke the client built into OSX - it's not at the path I found on the net, /System/Library/CoreServices/Applications Looks like I need to know the right invocation to feed to Finder, which doesn't have anything like a button labelled 'screen sharing'. I did find a menu item labelled 'connect to server', but that just gives me connection failures, perhaps because it's defaulting a URI type of afp:// which probably has nothing to do with vnc - or perhaps because the tool is unrelated to vnc.]

The built-in VNC client with OS X works just great with most VNC servers I've tried on FreeBSD. I've mostly been using TigerVNC from ports (seems to be the fastest with OS X's VNC client), and the only issue I have is when I restart the VNC server while connected to it. The OS X VNC client will reconnect (great!) but it sizes the window oddly, and I can't resize it. Since scaling is turned on, this usually results in a small screen that cannot be read. Just restart the VNC client (or close the window and open a new connection, if you've got multiple connections open), and it's all OK again.

Since I have xterms open all the time on my mac, I generally do it like so:

where <port> is the TCP port on which the server is running.

E.g. if it's :1, you'd use 5901 as <port>. You can even install the avahi port, and set up a service, so the VNC session shows up in Finder (although there's a Finder preference to change to make them show up since OS X 10.8, IIRC), just like a Mac that has 'screen sharing' enabled (i.e. it's running a VNC server).

You can connect to remote Linux machines with your Mac's built-in vnc client.

A VNC session will be connected to the remote Linux machine with the Screen Sharing application.

What you are looking for is the built in Screen Sharing app which resides in System/Library/CoreServices. It can connect to most VNC servers and is slightly faster than other options such as RealVNC.

Real VNC or VNC Viewer are the same client (aside from platform) as used on Windows PCs for decades. OS X is designed to work with VNC protocol out of the box.

As an added bonus, Real VNC is available as a free iOS app.

The only real concerns you should have in using it are security hardening, ie restricting access to specific IP addresses or users.

I don't have a lot of recent experience with VNC on the Mac but if you look at this (on stackexchange.com) it will explain how to connect to another client via the O/S X VNC server.

Apple's version is called Remote Desktop, the commercial version is just Apple Remote Desktop and really designed to manage Macs. I've used the latter but never tried to connect to a strictly VNC client. Not sure if it is possible.

If you go to the RealVNC website and choose 'Download > Viewer' you get a native OSX app that works nicely for me. I'm not exactly sure about the licensing terms, but going through 'Products > Product Selector' on the homepage seems to indicate that the Viewer is free (while the Server is licensed).

The built-in Apple Screen Sharing works nicely too, although I experienced hangs with xterm on the remote (tracked as 'linux xterm problem' in Apple Support Communities). The built-in is accessible from Safari through vnc://hostname in the address bar. If launched once, you can right-click on the icon in the dock and choose Options > Keep in Dock for easy access.

The 'Chicken' VNC did not work for me at all.

The best explanation I've seen for how to use apple's 'screen' as a vnc client is at http://www.davidtheexpert.com/post.php?id=5

He seems unaware of the period when apple had broken compatibility with non-apple VNC servers, but other than that his instructions seem great, and work beautifully on OS X El Capitan Version 10.11.6. (I'm no longer on 10.9.5)

Not the answer you're looking for? Browse other questions tagged macossoftware-recommendationremote-desktopscreen-sharing .

Virtual Network Computing (VNC) technology enables sharing a copy of one computer's screen display with another computer over a network connection. Also known as remote desktop sharing, VNC is typically used by people wanting to monitor or control a computer from a remote location rather than just accessing shared files.

The following free software packages provide VNC functionality. VNC software consists of a client user interface plus a server that manages connections to clients and sends desktop images. Some applications only support Windows PCs, while others are portable across different types of network devices.

VNC systems use network authentication to guard the connections initiated between clients and a server, but the remote desktop data subsequently sent over these connections is usually not encrypted. Those wanting to also protect the data can use free SSH utilities together with a VNC system.

The TightVNC Server and Viewer use special data encoding techniques designed to better support lower-speed network connections. First released in 2001, the latest versions of TightVNC run on all modern flavors of Windows, and a Java version of the Viewer is also available. 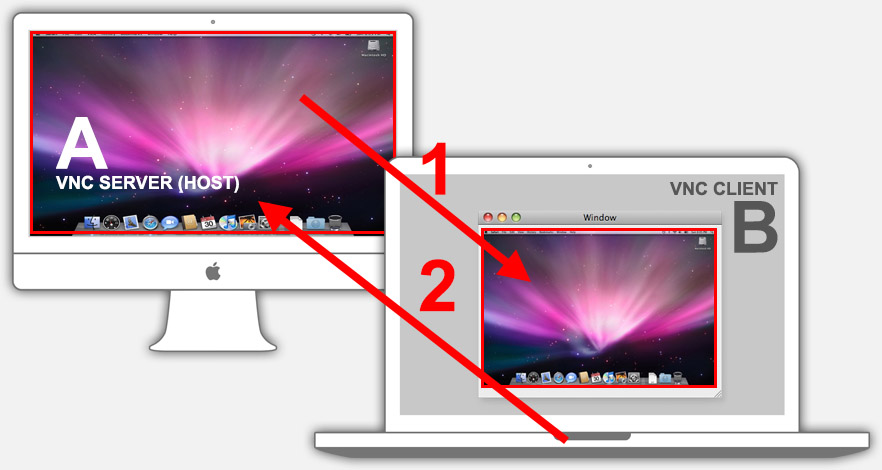 The creation of TigerVNC software was initiated by Red Hat with the goal of improving on TightVNC. TigerVNC development started from a snapshot of TightVNC code and has expanded support to include Linux and Mac as well as Windows, plus various performance and security enhancements.

The company RealVNC sells commercial versions of its VNC products (Personal Edition and Enterprise Edition) but also supplies this open-source Free Edition. This free client is not officially supported on Windows 7 or Vista PCs, but workaround procedures might allow it to function. RealVNC also sells (but not does provide a free version of) its VNC Viewer for iPhone and iPad on the Apple app store.

Developed by a small team of volunteers, UltraVNC is an open source VNC system that works similarly to RealVNC but supports Windows 7 and Vista clients. A companion software package called ChunkVNC adds remote control functionality to the UltraVNC viewer.

Chicken (of the VNC)

Based on an older software package called Chicken of the VNC, Chicken is an open source VNC client for Mac OS X. The Chicken package does not include any VNC server functionality, nor does the client run on any other operating system than Mac OS X. Chicken can be paired with various VNC servers including UltraVNC.

JollysFastVNC is a shareware VNC client for Mac created by software developer Patrick Stein. While the developer strongly encourages regular users to purchase a license, the software is free to try. JollysFastVNC is designed for speed (responsiveness) of remote desktop sessions and also integrates SSH tunneling support for security.

SmartCode Solutions provides this hosted Web page demonstrating how a browser running their ViewerX client software can be used as a VNC client. The SmartCode ViewerX products are not free, but this demonstration client can be used freely from Windows PCs using an ActiveX-control enabled browser like Internet Explorer.

Mochasoft provides both a full commercial (pay, not free) version and this free Lite version of its VNC client for Apple iPhone and iPad. Compared to the full version, Mocha VNC Lite lacks support for special key sequences (like Ctrl-Alt-Del) and some mouse functions (like right-click or click-and-drag). The company has tested this client with various VNC servers including RealVNC, TightVNC and UltraVNC.

Echoagent Systems designed EchoVNC to be a 'firewall friendly' remote desktop package based on UltraVNC. However, the extensions in EchoVNC for improved firewall compatibility rely on a proxy server system called 'echoServer' that is a separate, commercial product.